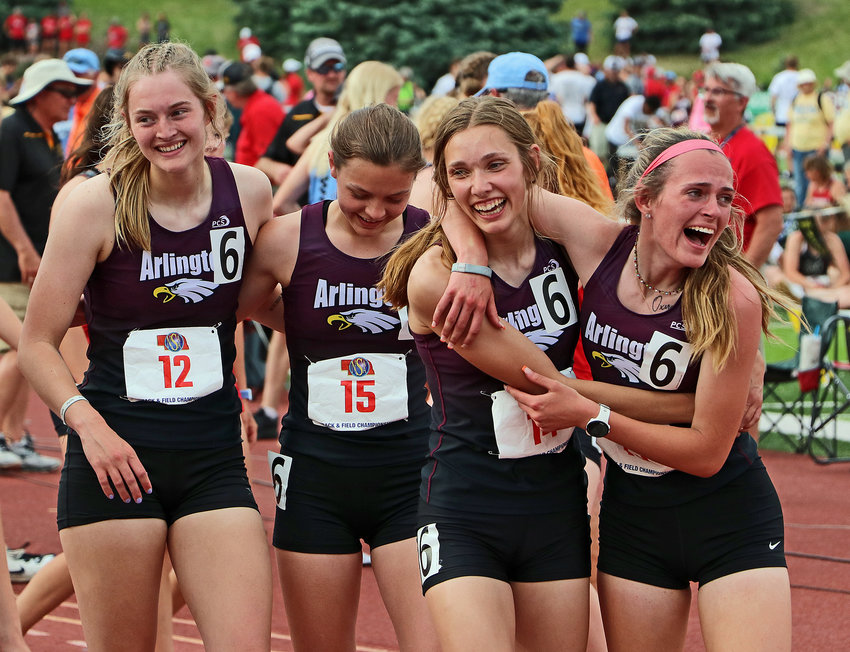 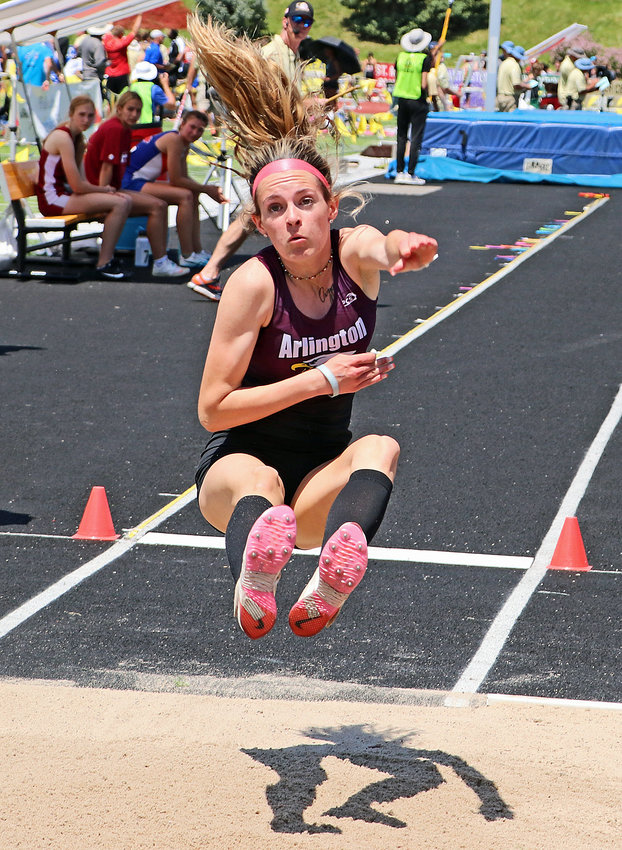 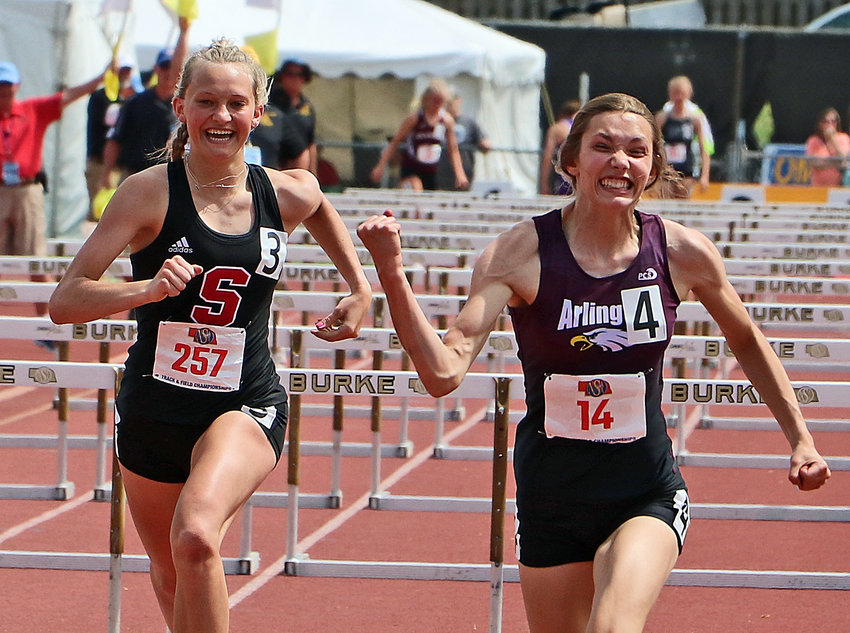 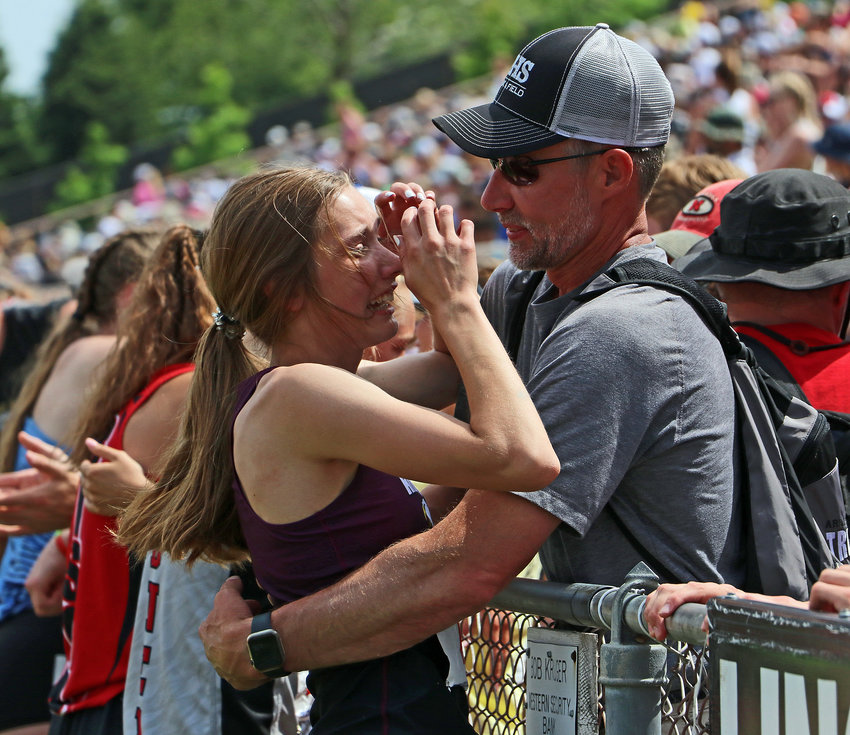 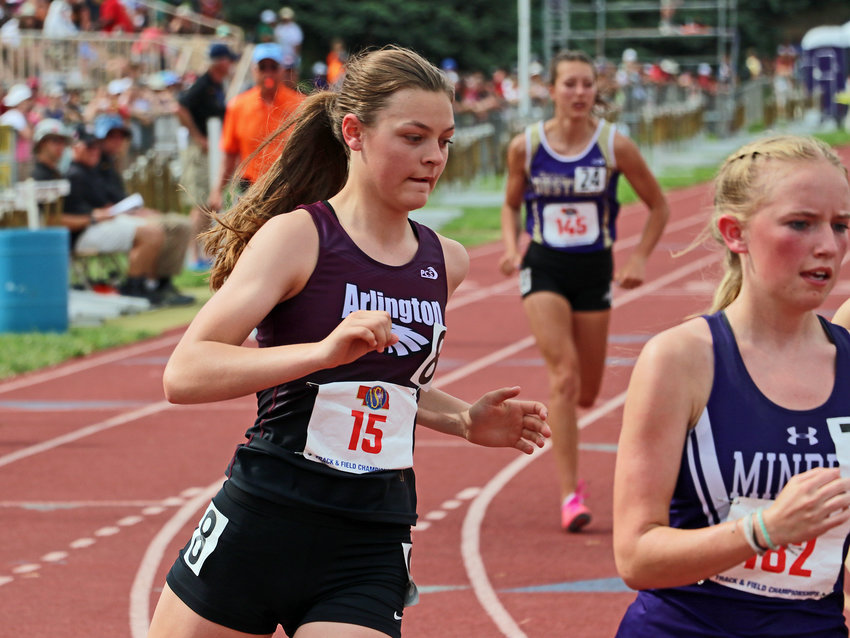 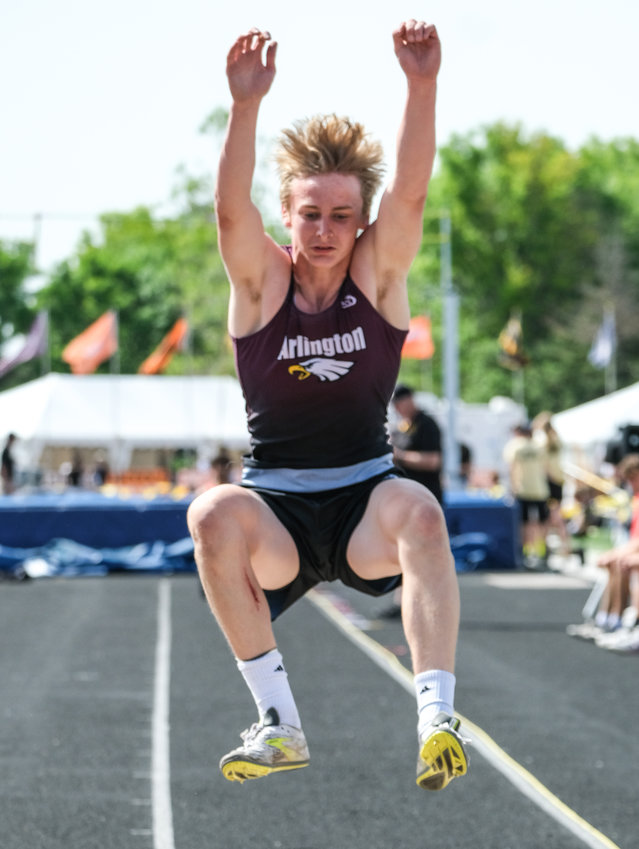 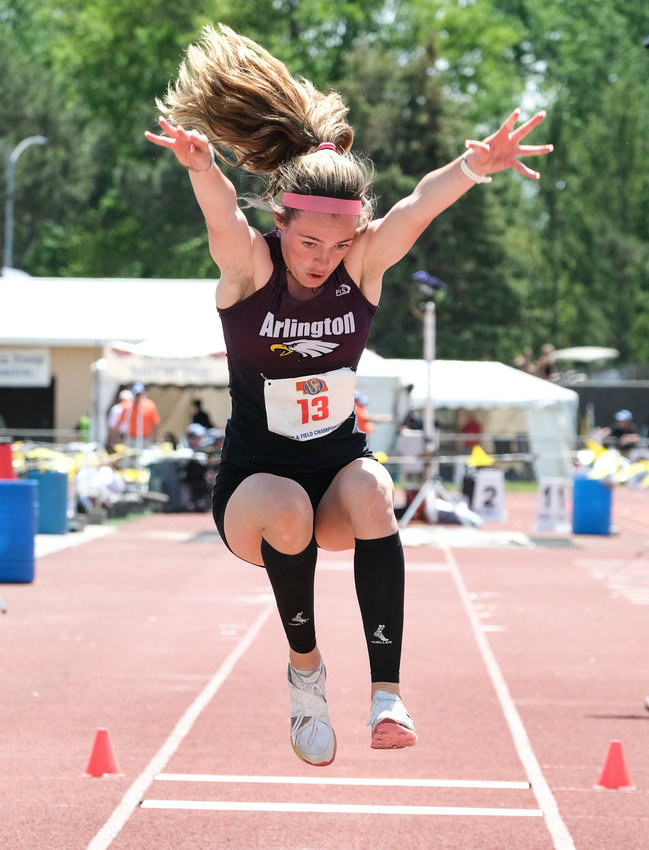 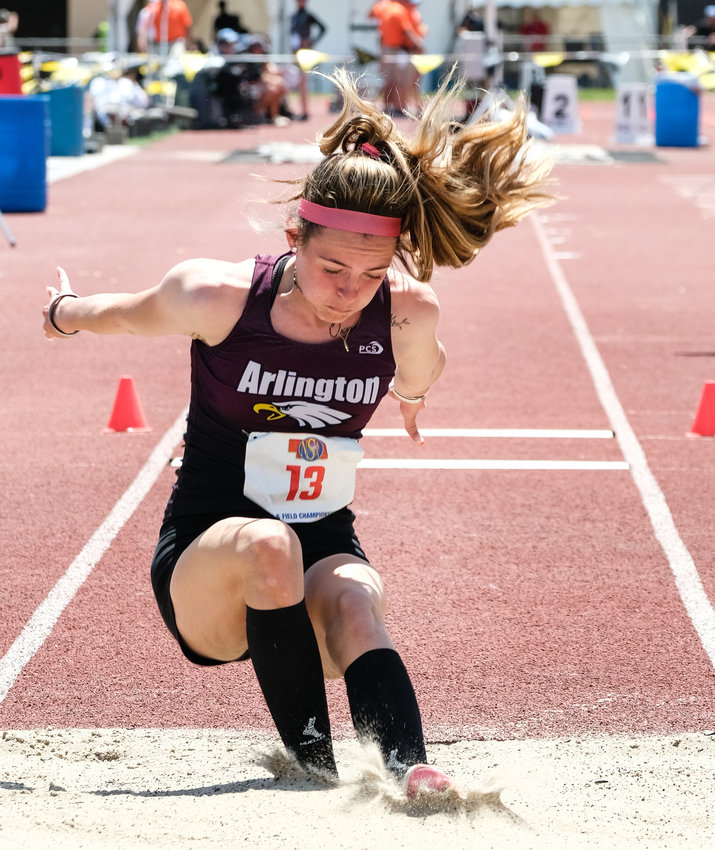 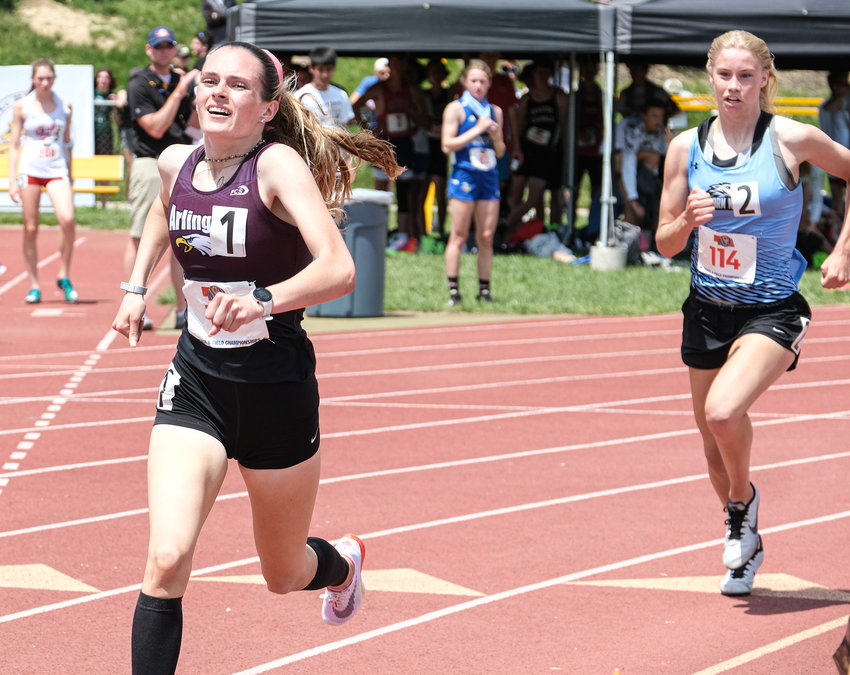 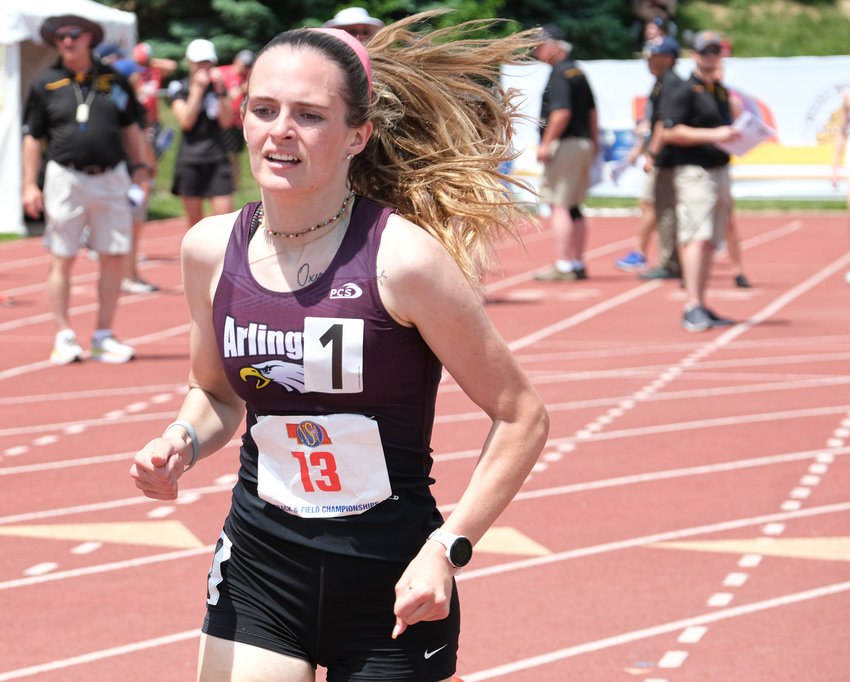 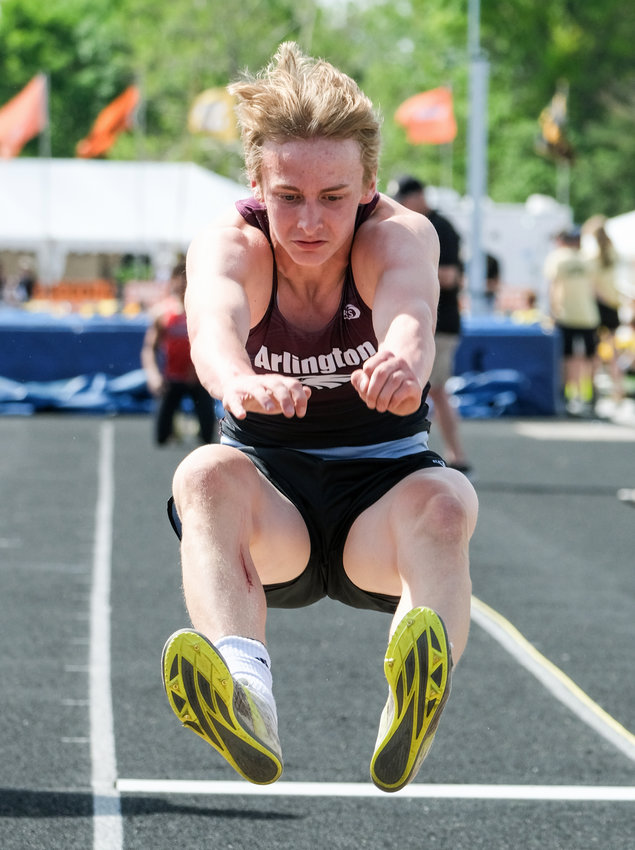 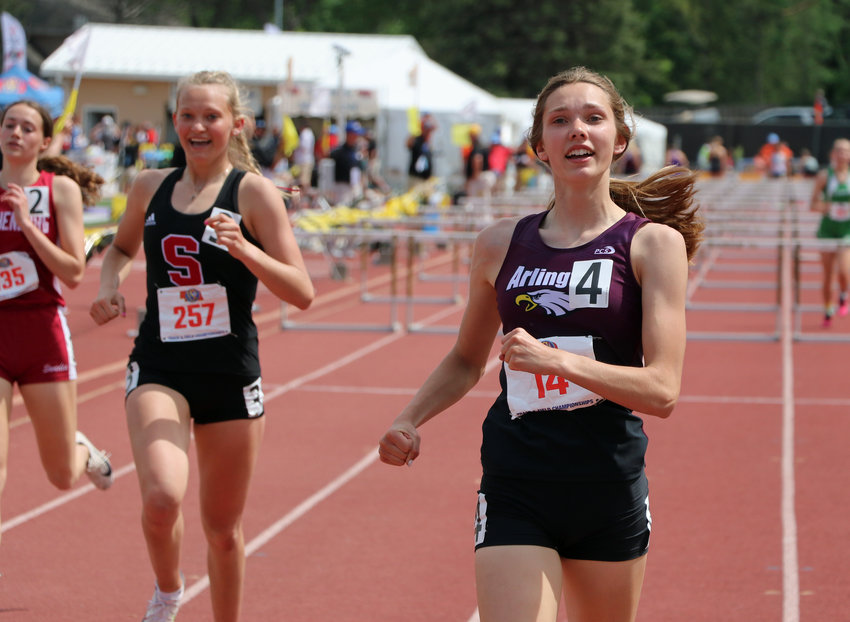 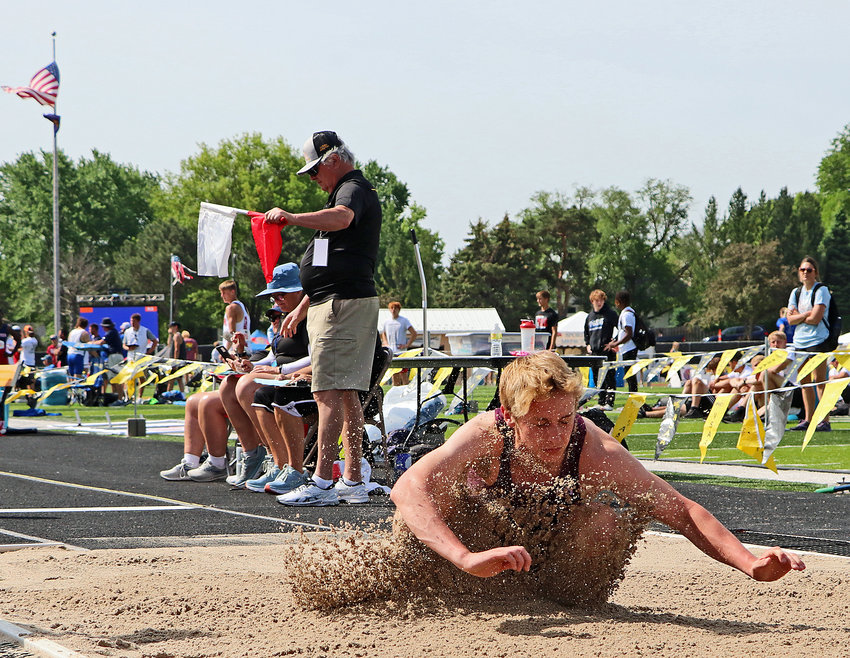 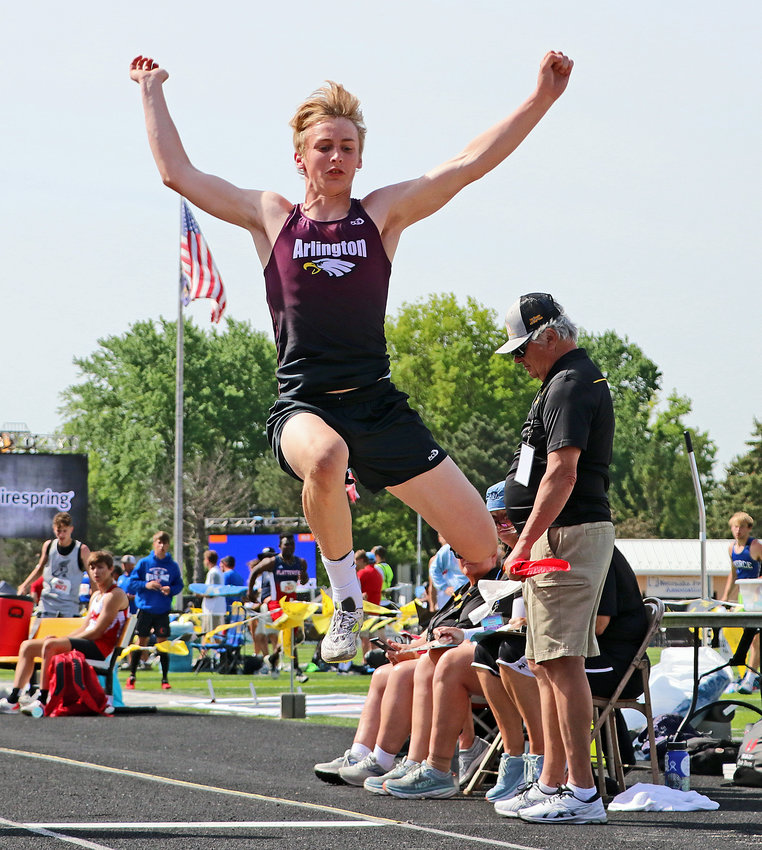 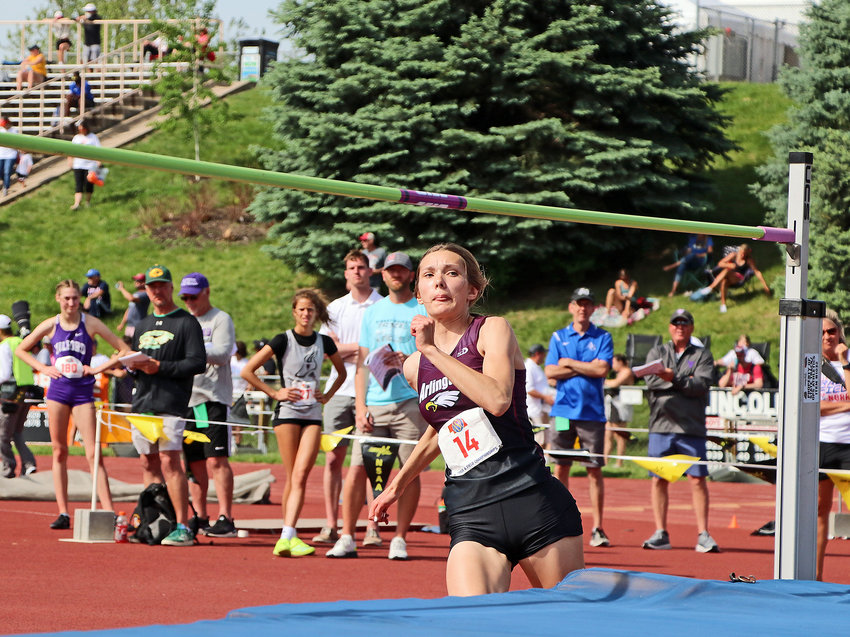 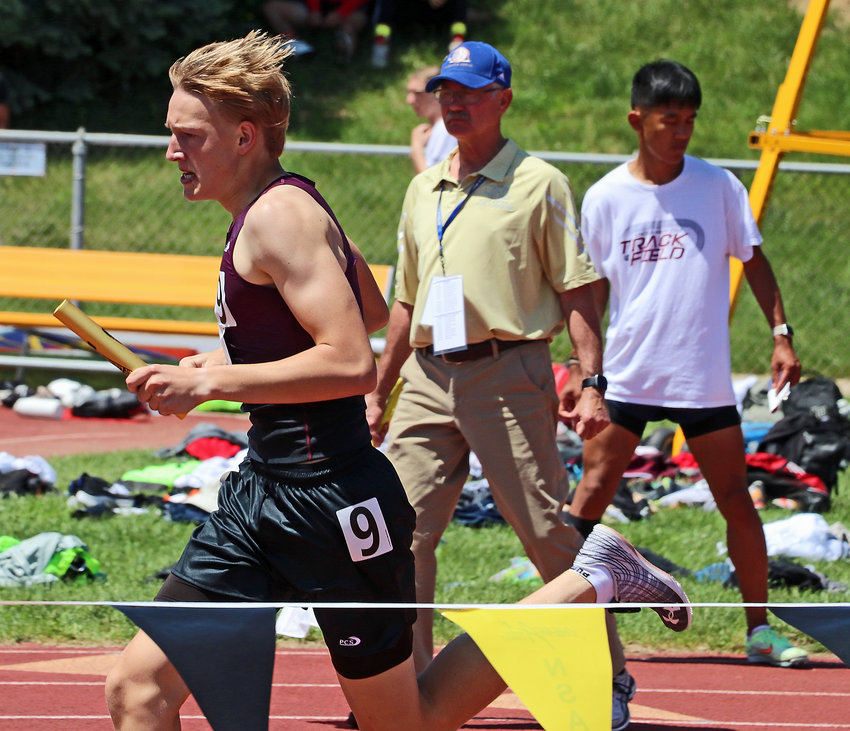 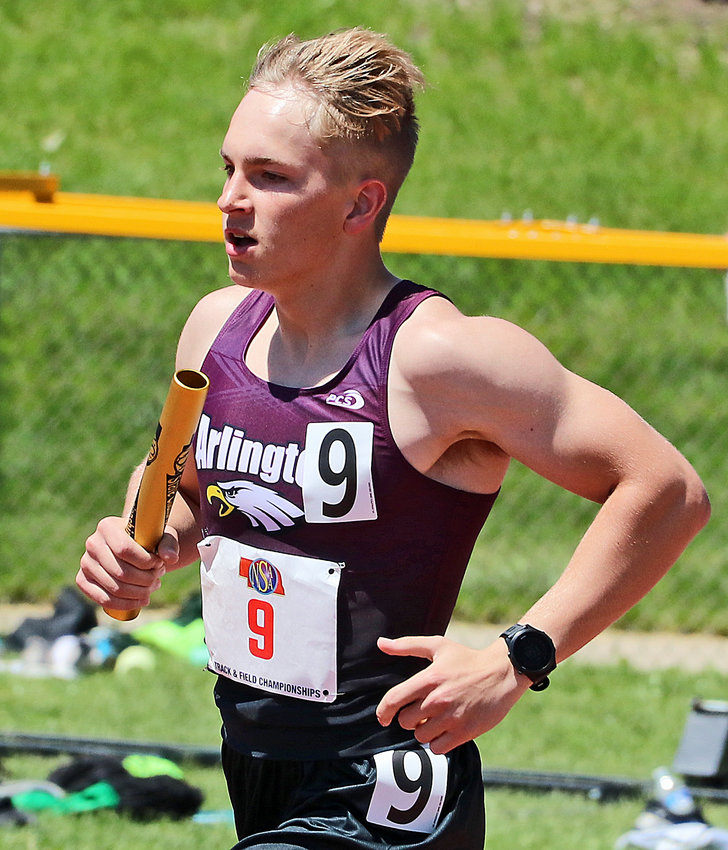 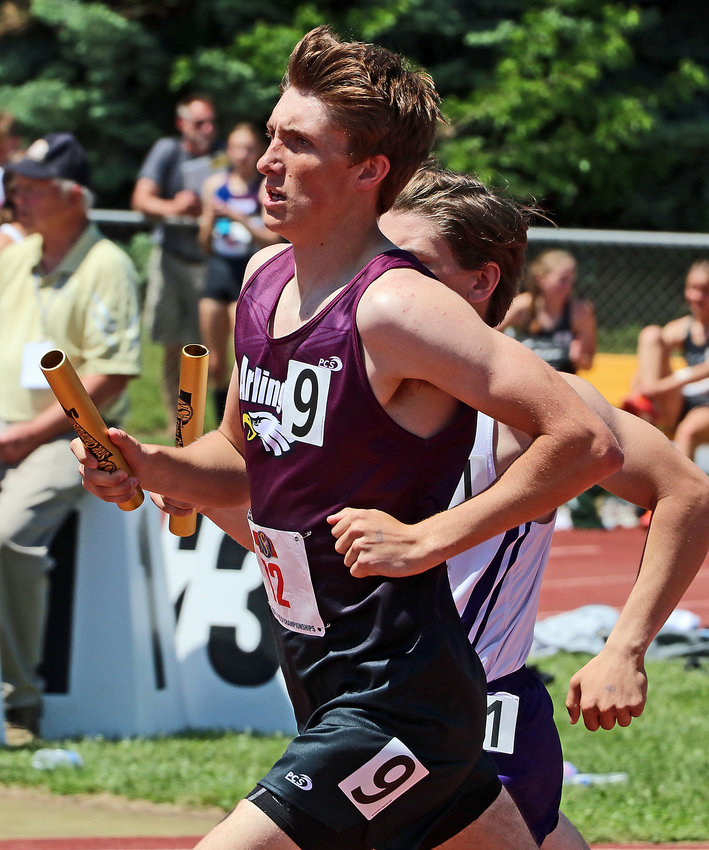 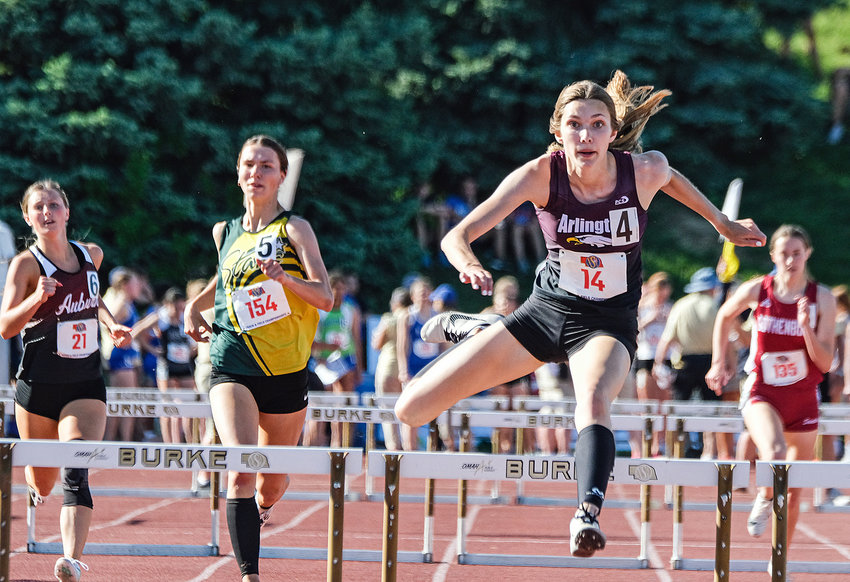 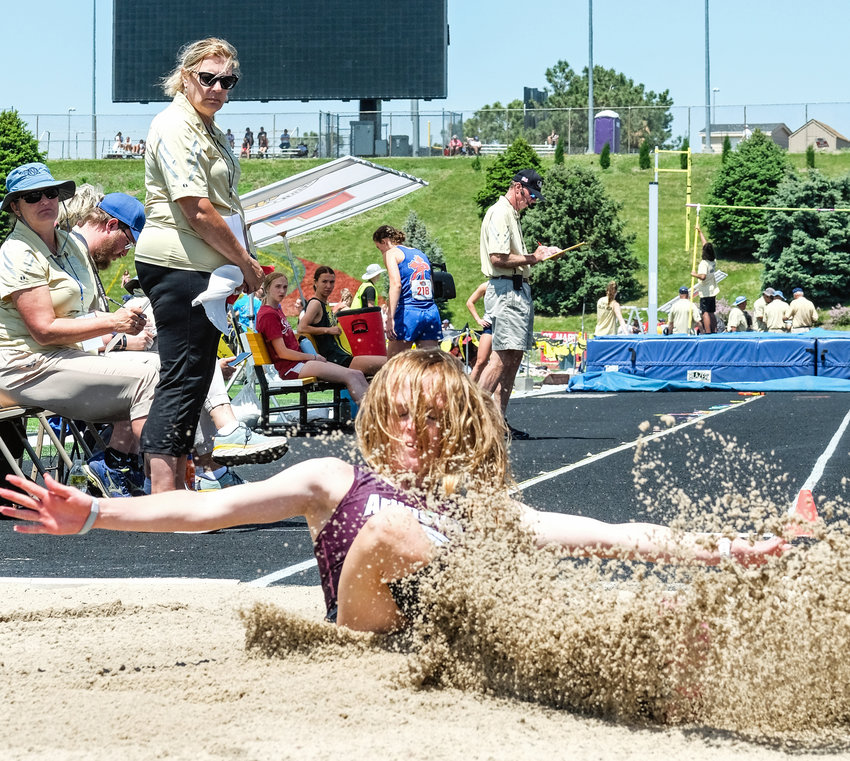 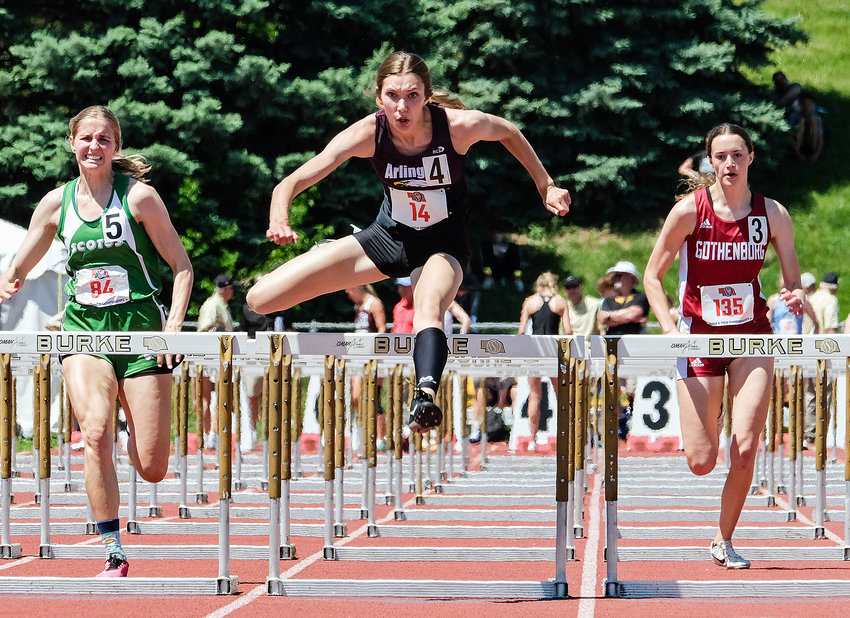 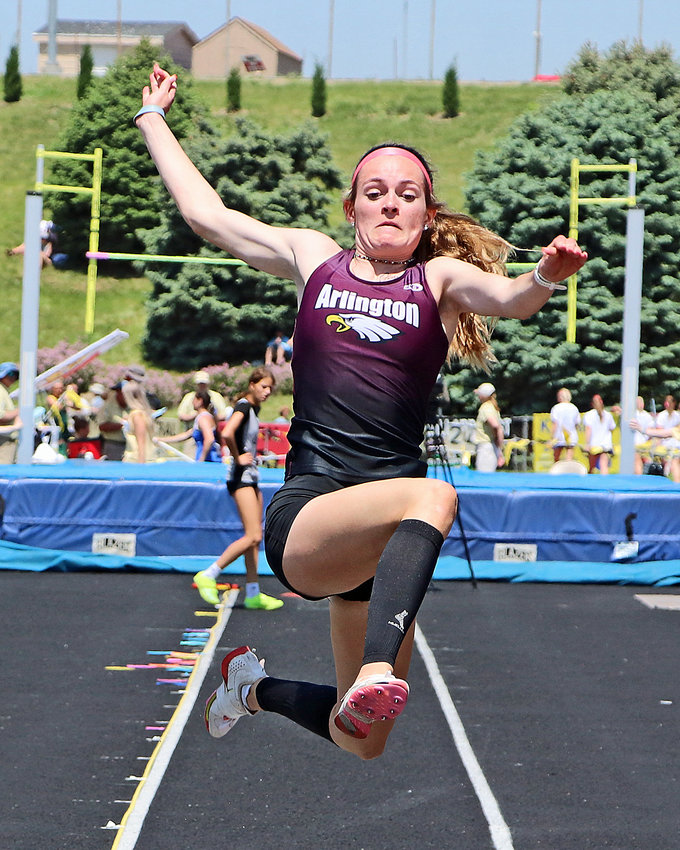 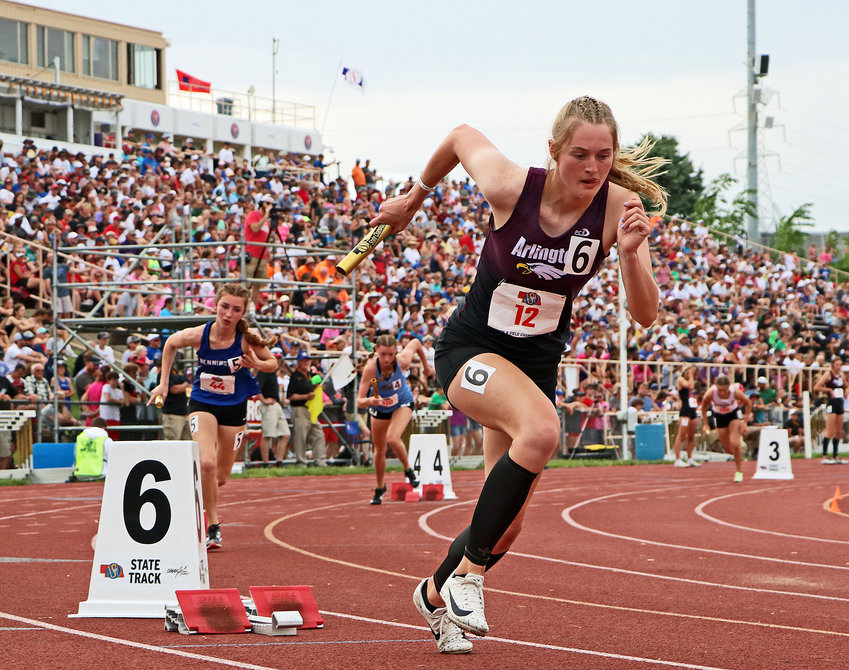 The Gubbels' last state meet in Arlington High School colors began with a failure.
Steven watched from the designated coach's area Thursday at Omaha Burke Stadium as his daughter, Kailynn, caught the bar on three-straight high jump attempts at just 5 feet, 1 inch — well below her usual efforts.
“We took a walk around the track,” the father said, explaining how his Iowa State-bound athlete refocused.
“It was hard, but I figured God has a plan for me,” Kailynn explained.
Yes, the second-day of the NSAA State Track and Field Championships may have started slow for the Eagles, but it ended in celebration of a 1,600-meter relay school record and a third-place girls team finish. In between, the youngest child of Steven and Leslie earned two gold medals, bettering her Class B record in the 100-meter hurdles.
“It ended well,” said Steven Gubbels with a smile, leaning on the chain-link fence surrounding the Burke Stadium track as he has for more than two decades.
“I'm at a loss for words, really,” Kailynn Gubbels said after winning the 100 hurdles in 14.54 seconds. She was surprised at the announcement of her new state record, though the fellow hurdlers she'd raced were pleased to celebrate the moment with her.
“I don't know if it's just people from Nebraska or it's hurdlers, who knows, but they make everything a lot better,” Gubbels said.
The AHS senior also won the 300 hurdles in 45.13 before closing out her Eagles career alongside Chase Andersen, Hailey O'Daniel and Keelianne Green with a third-place effort in the 1,600 relay. The lineup finished in 4:01.86, a new school best.
Andersen, another senior, didn't compete at districts due to illness — Whitney Wollberg did — but delivered a pace-setting first leg to the season-capping race.
“I haven't broke 64 (seconds) all year,” she said.
But the Eagle did Thursday as the relay squad earned a bronze medal.
“It feels amazing especially because I knew it was going to be a really close race,” Andersen said.
Green, a junior, ran her own close race Thursday, but also had a standout two days at state overall. She was a member of the third-place relay squad, but also earned two individual silver medals and a fourth-place finish in the triple jump.
“I was nervous yesterday,” the Eagle said Wednesday after clearing 17 feet, 9.25 inches in the long jump. “But once I got here, I was kind of just like, 'Oh, it's time to go.'”
Green was hustling Thursday, too, finishing her second-place 800 run in 2:17.78.
“There's like a ton of people here,” she said. “So once you get on the track, once you start going, I think the adrenaline kicks in.”
Colby Grefe, meanwhile, supplied his own kick during the Eagles' eighth-place effort in the boys' 3,200-meter relay. The senior took the last handoff in ninth and earned a spot on the podium for his team, which included Nolan May, Kevin Flesner and Dallin Franzluebbers. They finished in 8:28.28.
“It was always just a goal of mine to even just get down here,” said Grefe, who also competed in the 1,600 run. “So, to get down and qualify both days was definitely cool for me.”
Arlington sophomore Kaden Foust also earned his way to state, but left disappointed with his 13th-place finish in the long jump.
“It was cool being able to make it, but it just sucks not being able to actually do something,” he said.
Even though he struggled to hit the takeoff board, Foust improved with every leap, clearing 20-2 on his final attempt.
Overall, the AHS boys finished 39th in the Class B team standings. The girls, meanwhile, finished tied for third with Pierce with 47 points. The Elkhorn North girls were first and Bennington was second, but Steven Gubbels finished out his Eagles coaching run with the girls' best state finish since 1988 — well before he even took over in 2001.
“Just proud of them,” the coach said. “Proud of how they performed.”