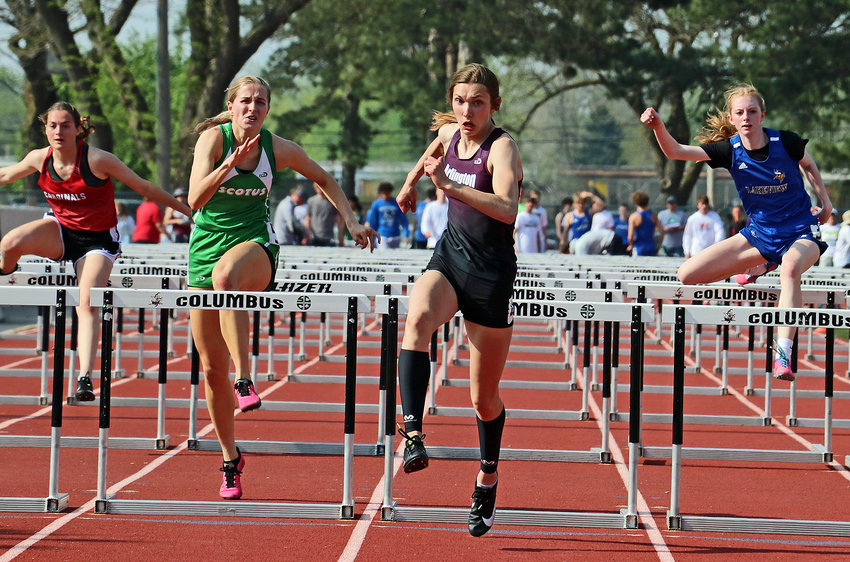 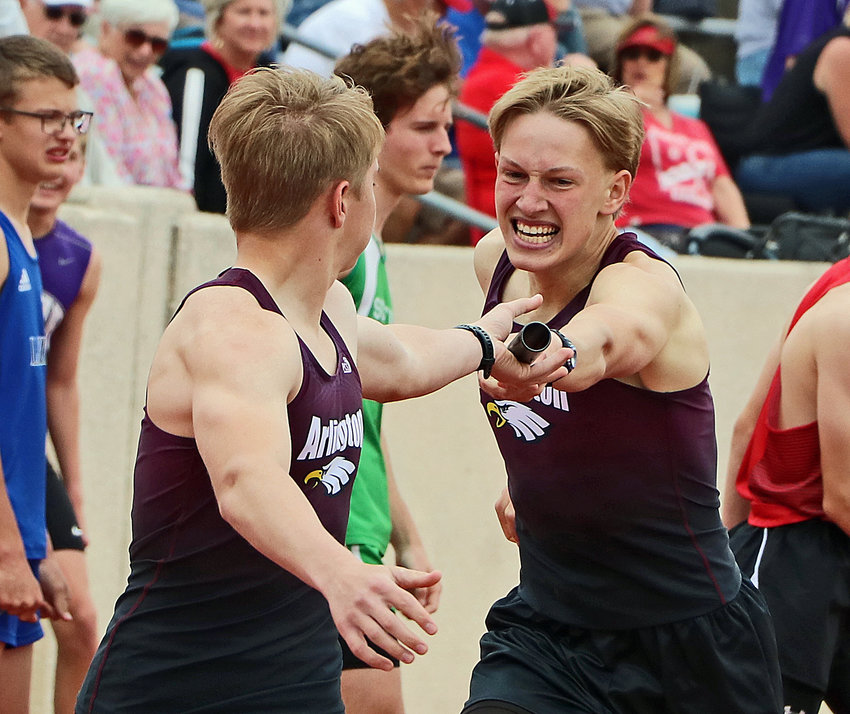 Arlington's Nolan May, right, hands the baton to Kevin Flesner on Tuesday in Columbus.
Grant Egger 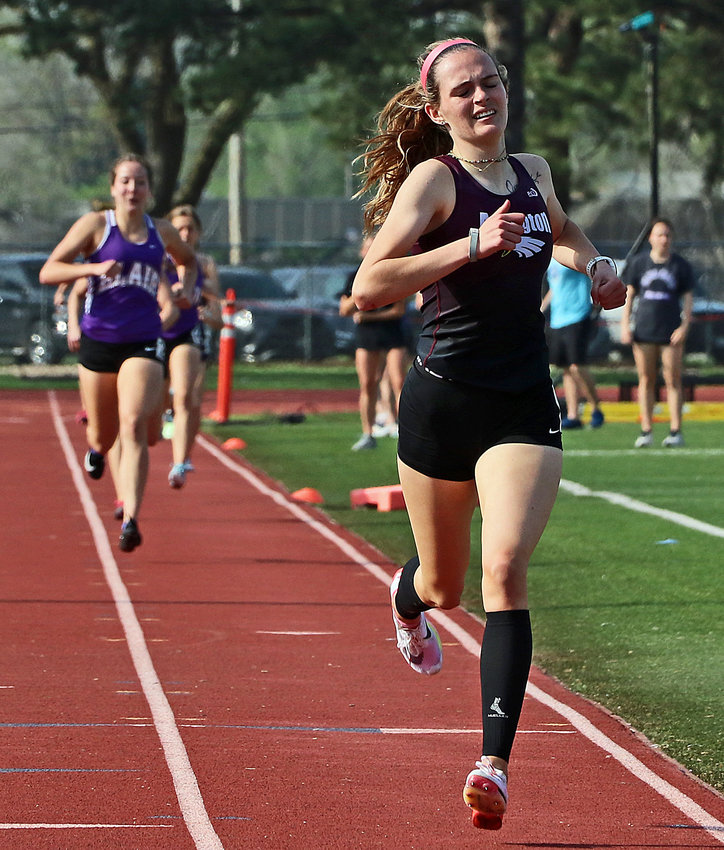 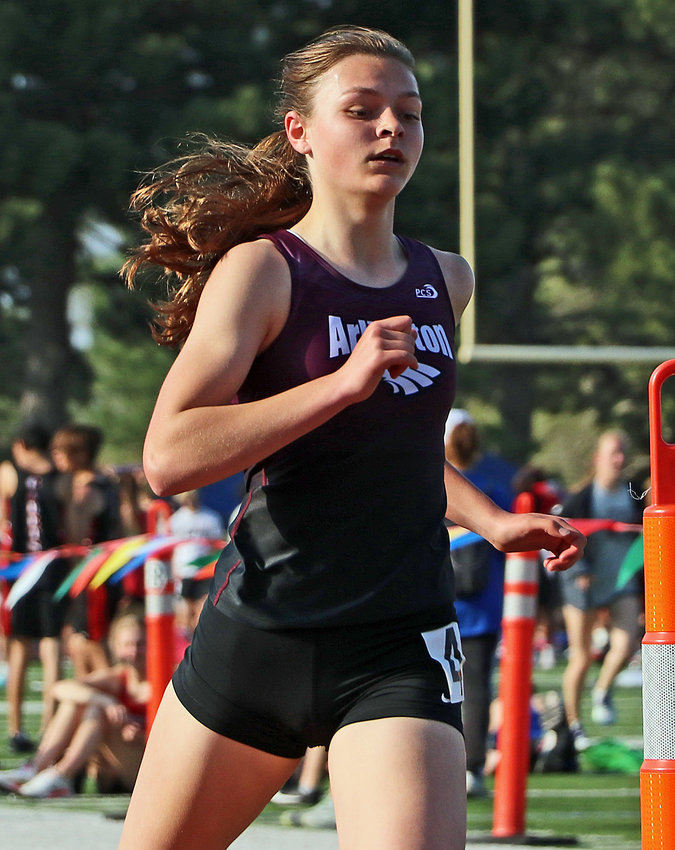 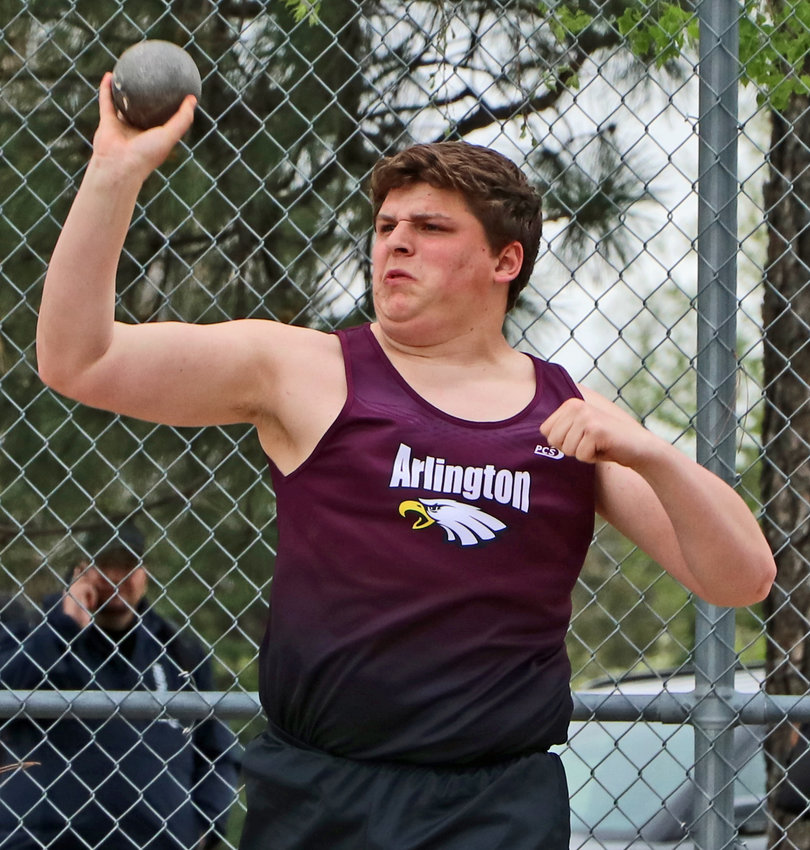 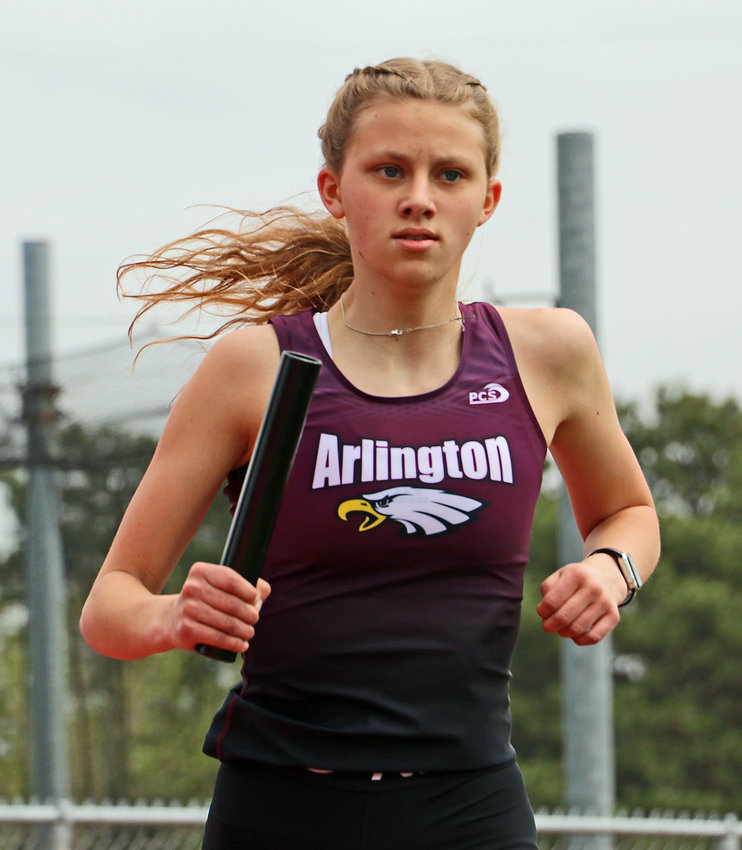 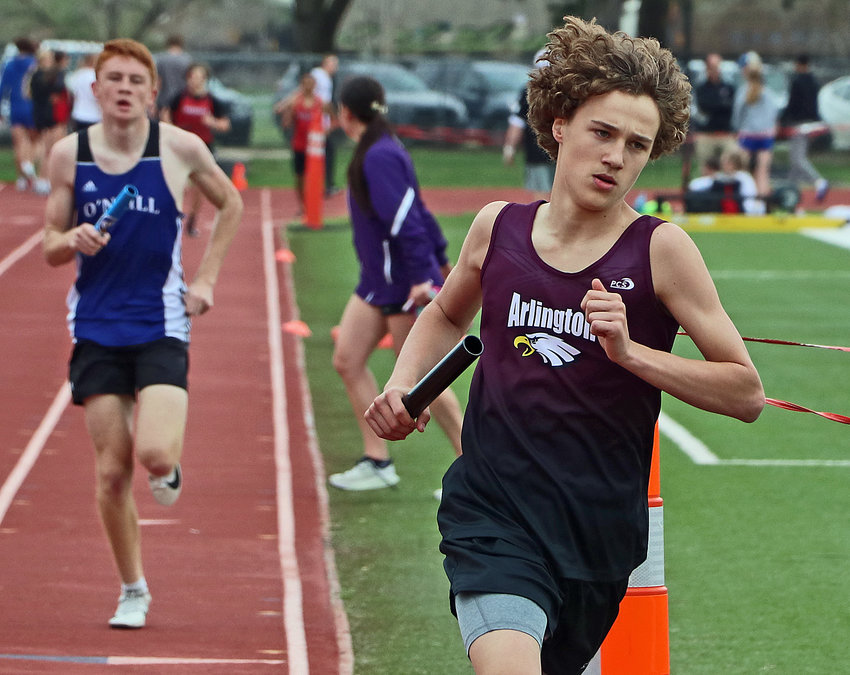 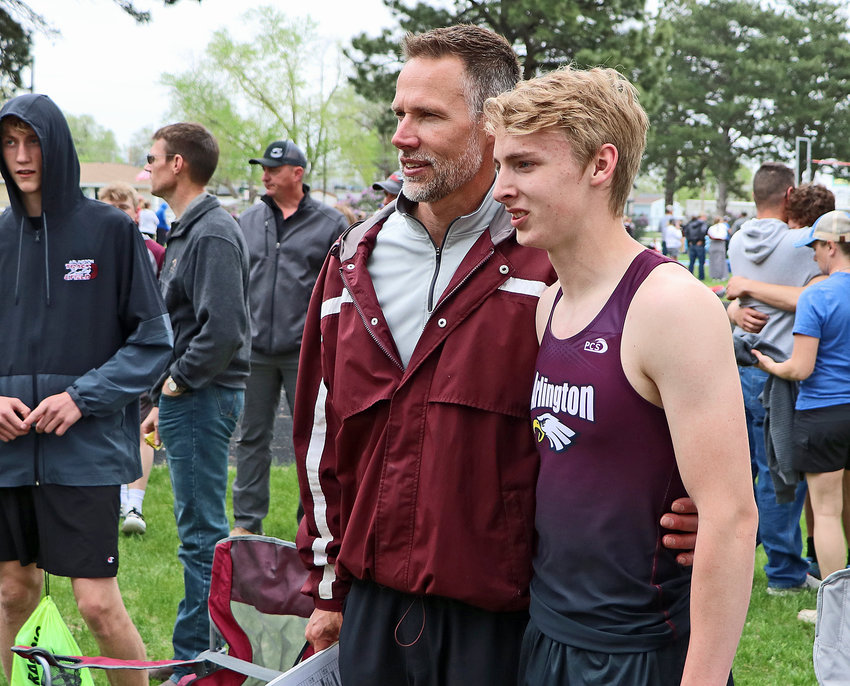 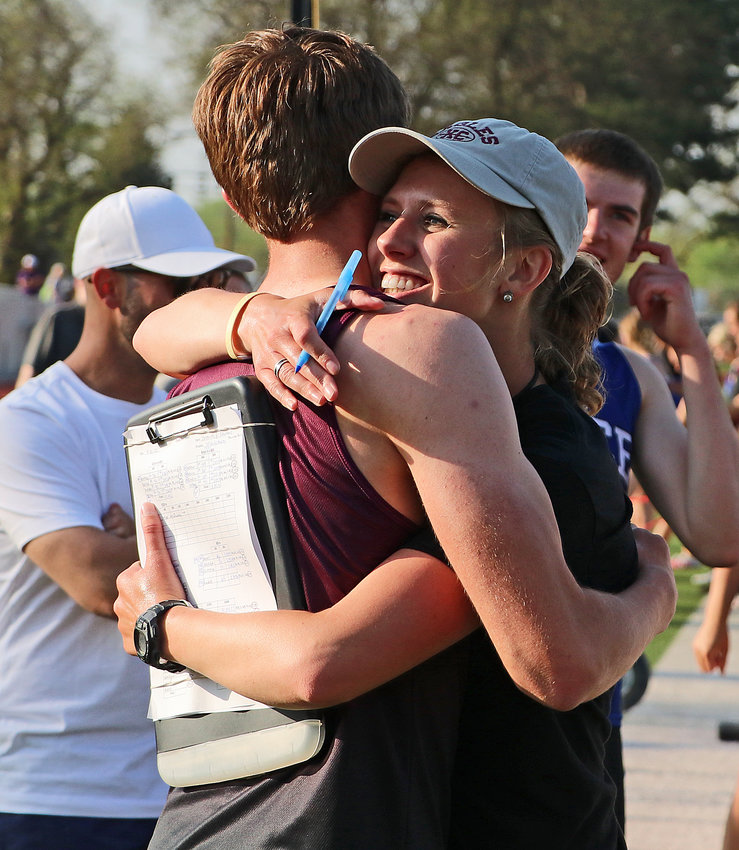 The Arlington 1,600-meter relay team danced before winning its race Tuesday during the Class B District 4 meet in Columbus.
“I could feel that something good was going to happen,” senior Kailynn Gubbels said. “And then we went out and broke our own school record.”
Whitney Wollberg, Hailey O'Daniel, Keelianne Green and she clocked in at 4:05.29, earning one of the Eagles' eight event wins and one of its 11 overall state qualifications.
Nine AHS athletes will next compete during the Class B meet, which begins 9 a.m. Wednesday at Omaha Burke Stadium.
“I'm very proud how all of us ran,” Gubbels said, specifically noting the efforts of her 1,600 relay teammates.
O'Daniel filled in for the absent Chase Andersen, delivering a championship-worthy 400 time after already setting a 9-second personal record in the 1,600 run.
“So proud of her as a freshman,” Gubbels said.
Wollberg, meanwhile, hadn't always ran out of the blocks to start the race, but did successfully Tuesday despite her nerves.
“It's just awesome,” the ninth-grade Eagle said. “The fact that I can go to state as a freshman. That's crazy.”
Even a four-event winner, Green, overcame adversity to help the Eagle relay squad to victory. She received medical attention during the triple jump, but won it, the long jump, the 800 and the aforementioned relay.
“I think getting some good team points, some good marks for everybody all over the board today was just amazing,” Green said. “I think it feels really good that we have quite a big team that's going with us (to state) this year.”
In addition to the 1,600 relay, Gubbels will compete in the high jump, 100 hurdles and 300 hurdles in Omaha after winning all of them in Columbus. Her 45.2-second time in the 300s caught her by surprise, particularly after the start.
“I stuttered to the first (hurdle) and it scared me a little bit,” the senior explained. “After that happened, I thought 'No way am I going to screw anything else up.'”
AHS sophomore Kaden Foust, meanwhile, won the long jump with a leap of 21 feet, 7.5 inches. He said he's “finally” leaping from the board that determines a clean jump and a scratch.
“That definitely helps a lot,” the Eagle said. “Early on in the season, I was scratching and way behind (the board). Now, I'm finally starting to figure out where to go off from.”
O'Daniel has figured out the mile, too, delivering her best time to finish second at the district meet.
“I know in my heart I'm really competitive,” she said. “I know I wouldn't let myself not go to state.”
Senior Colby Grefe is going to state with Nolan May, Kevin Flesner and Dallin Franzluebbers in the 3,200-meter relay after a second-place effort, but also in the individual mile. He made a late lunge to get it done with his second silver-medal performance of the day.
“It wasn't planned like that,” Grefe said. “But I knew I still had a little room to catch him. Glad I did.”
All nine Eagles will be glad to compete at Burke Stadium next week.
“It'll be cool being there,” Foust said. “That's for sure.”

Arlington golf season ends with a 407 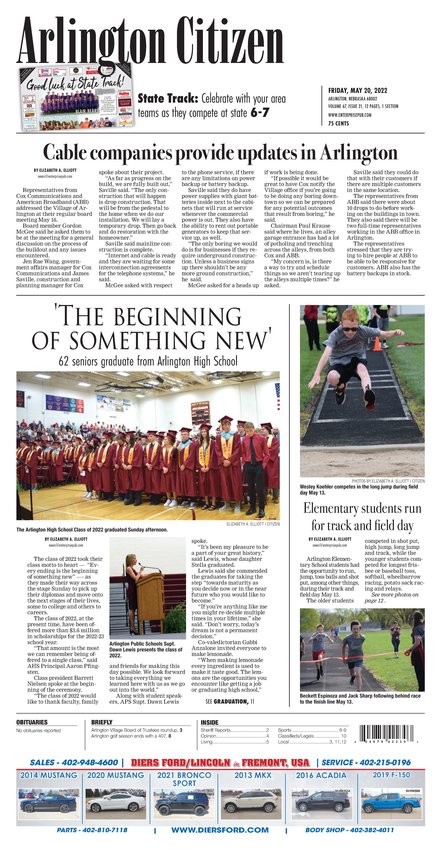