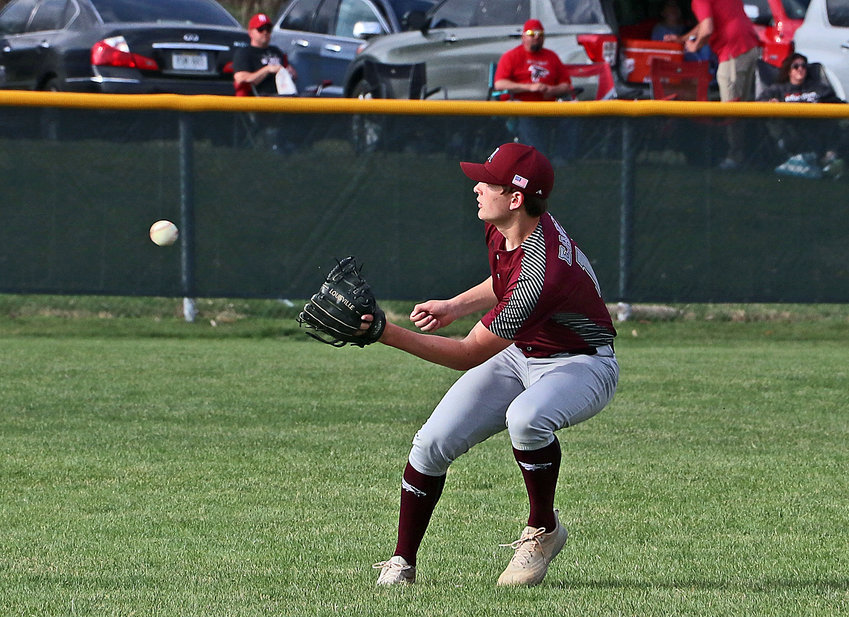 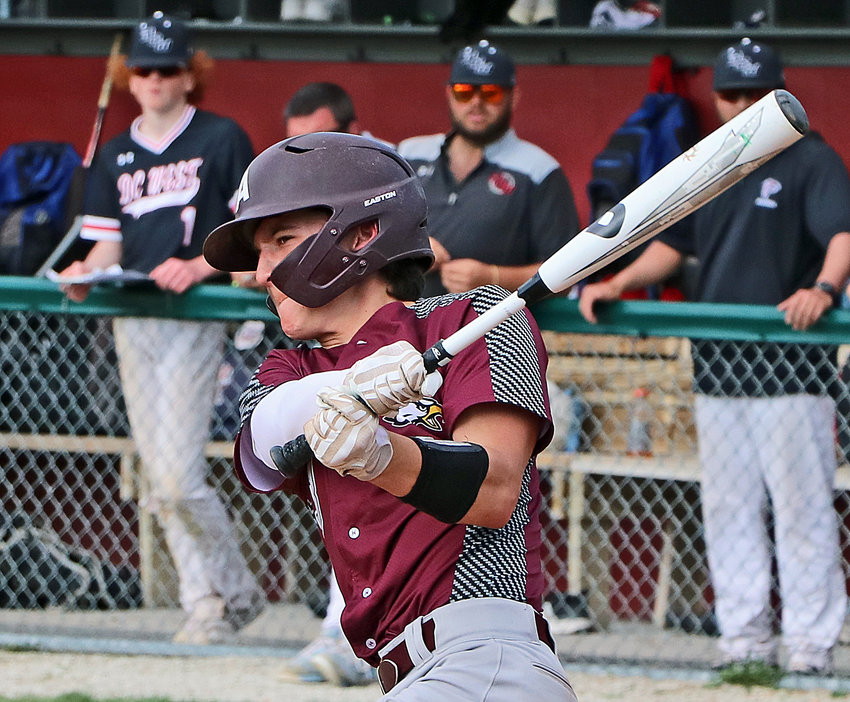 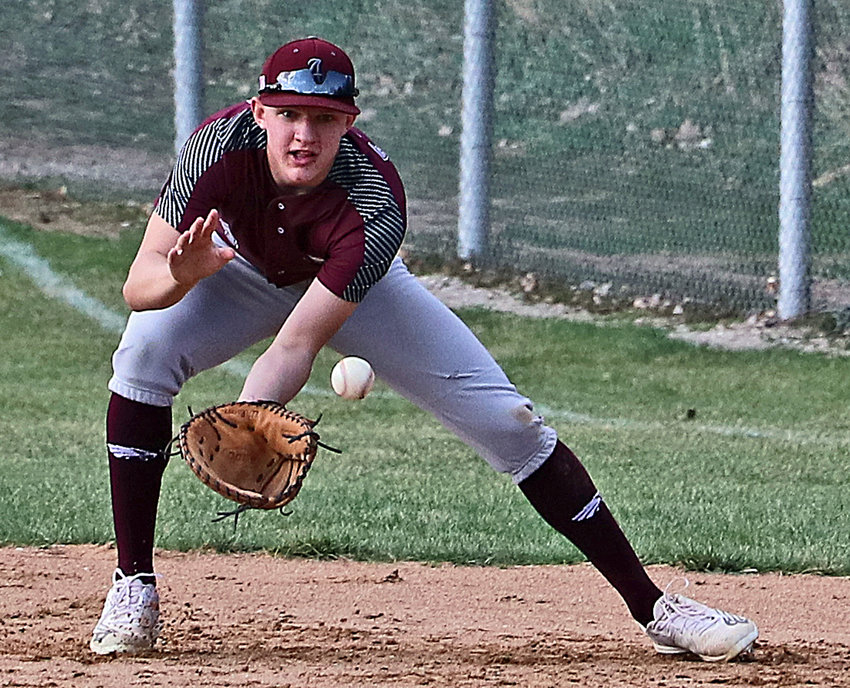 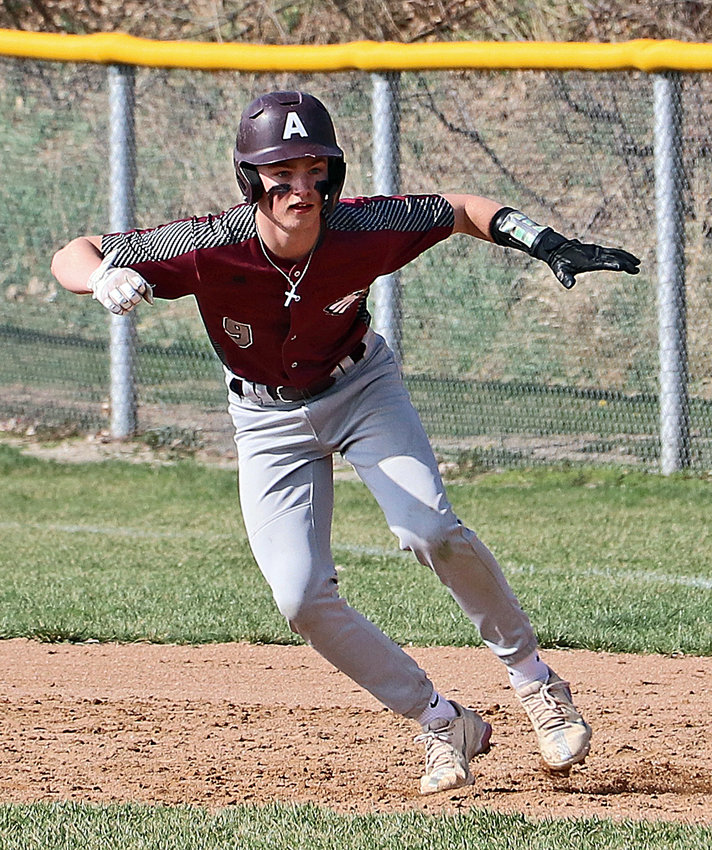 Arlington base runner Dalton Newcomer leads off of first base Friday at the Washington County Fairgrounds.
Grant Egger 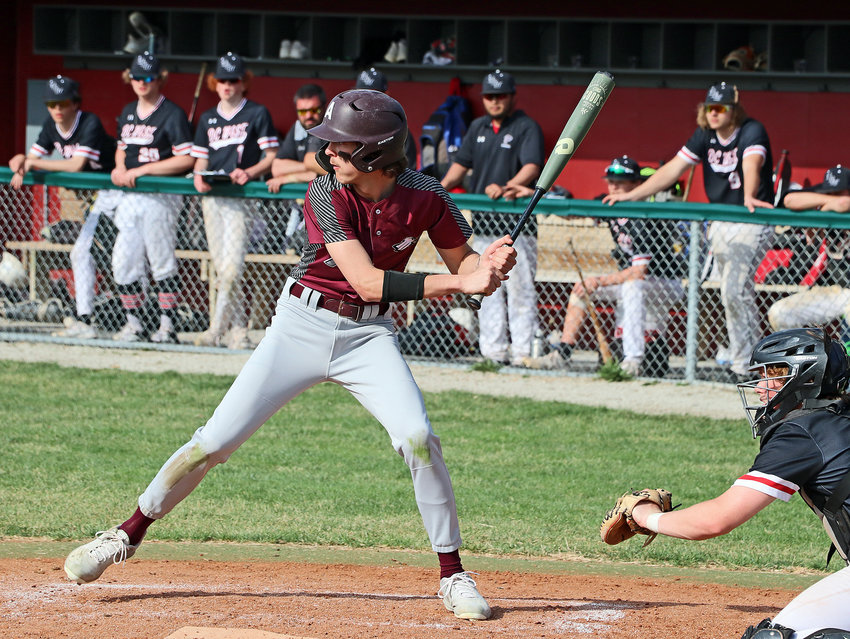 High winds played a role in Arlington's Friday evening baseball victory at the Washington County Fairgrounds.
“Basically, if you hit a fly ball in the air, it will carry,” senior Nick Smith said after the 13-11 Eagle win over Douglas County West.
Coach Tyler Stender's team improved to 9-9 Saturday with a 29-2 win against the first-year, returning Omaha Benson program, but first it beat the Falcons for a second time this season. AHS trailed 4-0 after the top of the first inning, but took the lead for good in the fifth when Smith's two-RBI triple broke a 10-10 tie. The deep ball to right field bounced off the top of the fence and back into the field of play, narrowly missing home run status.
“Ump said it had to go over,” Smith said with a grin.
After DC West pulled within 12-11 during the top of the sixth inning, Jack Bang pushed across an insurance run with another wind-aided outfield hit to the gap.
“On windy days like this, you know it's going to be a high-scoring game,” Smith explained. “Just because, when you put the ball in play, you don't know what's going to happen.”
The two-run advantage did give Arlington relief pitcher Kaden Pittman confidence going into the seventh frame, though.
“I felt like I could, kind of, go at the batter without being scared about it,” he said.
The first Falcon hitter of the final inning cracked a fly ball into right field, where the Eagle's Darren Olson was able to run into the south wind, slide on his knees and catch the ball for the first out.
“My first instinct was, 'Catch the ball, you know?'” the outfielder said. “I was being aggressive out there and just stopping the ball by any means.”
Two groundouts later, AHS had its eighth win of the spring. It was outhit 12-11, but both teams had five errors.
“We knew there were going to be errors. That, really, wasn't avoidable,” Pittman said. “But we just had to scrap together runs.”
Smith — who also started on the mound — finished with a game-high four RBIs, while Bang finished with three hits. The Eagles' Logan Kaup, Dalton Newcomer, Bang, Smith and Pittman all contributed run-scoring turns at the plate whether by hit, sacrifice or contact swings into DC West errors.
Pittman and Smith combined for seven innings pitched and six total strikeouts.
A day later, Arlington's Trevor Denker went 4-for-4 with a homer — while Weston Wollberg was 3-for-3 with a grand slam — as the Eagles bested 0-9 Benson by 27 runs. The Bunnies' closest game this season was a 15-run defeat.
Blaine Vogt had three hits, too, as Stender's team notched 19 total. Colton Willmott had three RBIs.
Bang earned the pitching win, striking out four Benson batters across two innings.
AHS was scheduled to host Platteview on Monday and next plays 4:30 p.m. today at Platte Valley.