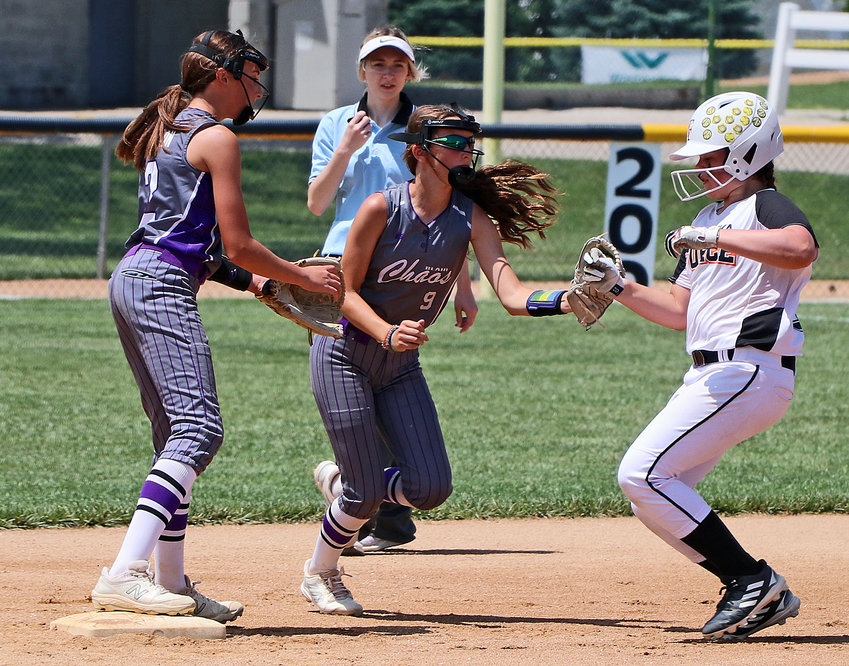 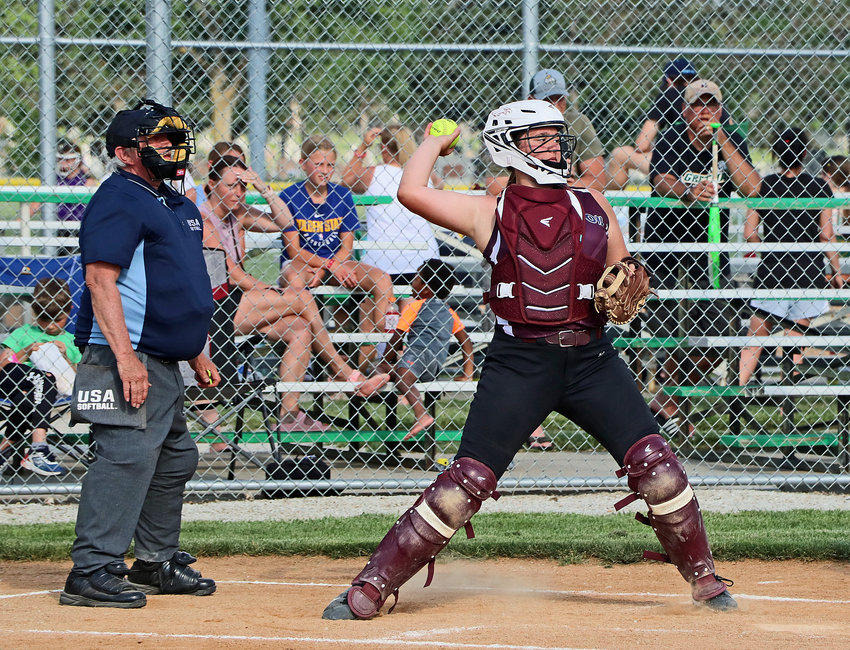 Arlington age 12 and younger catcher Hayley Arp tries to catch a base runner stealing with a throw to second base June 10 at the Blair Youth Sports Complex.
Grant Egger 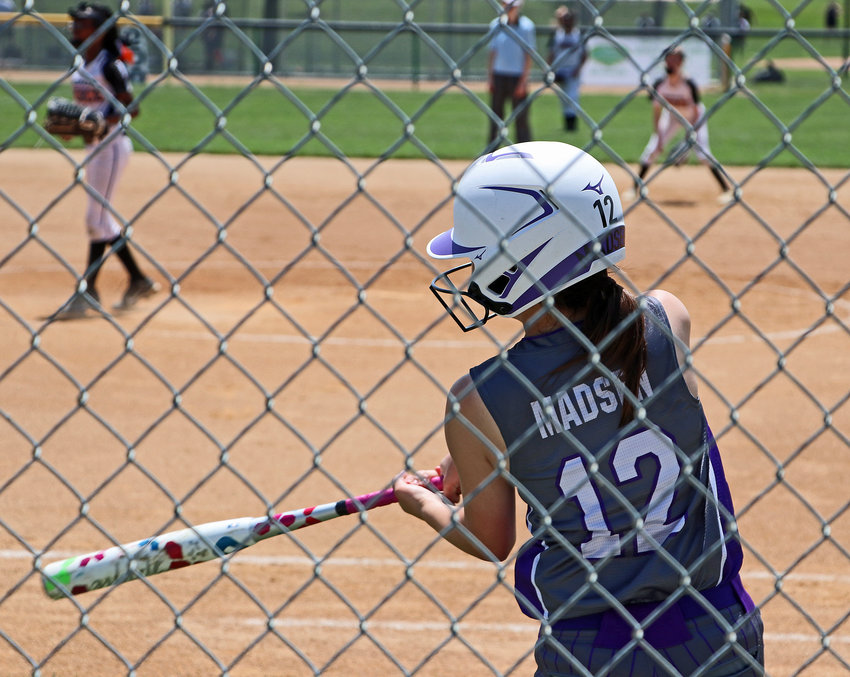 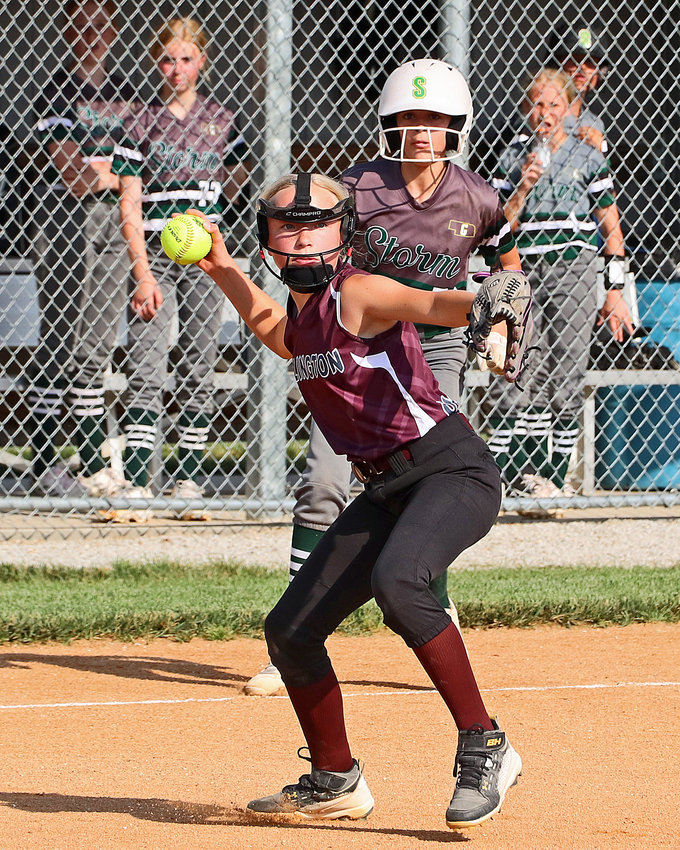 Arlington 12U pitcher Jaydee Overholt throws the ball to first base June 10 at the Blair Youth Sports Complex.
Grant Egger 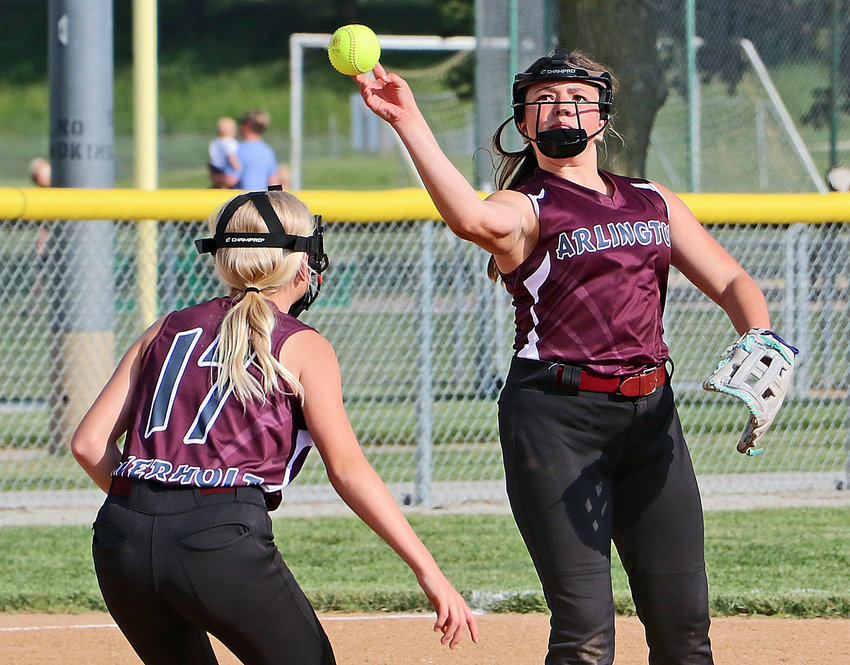 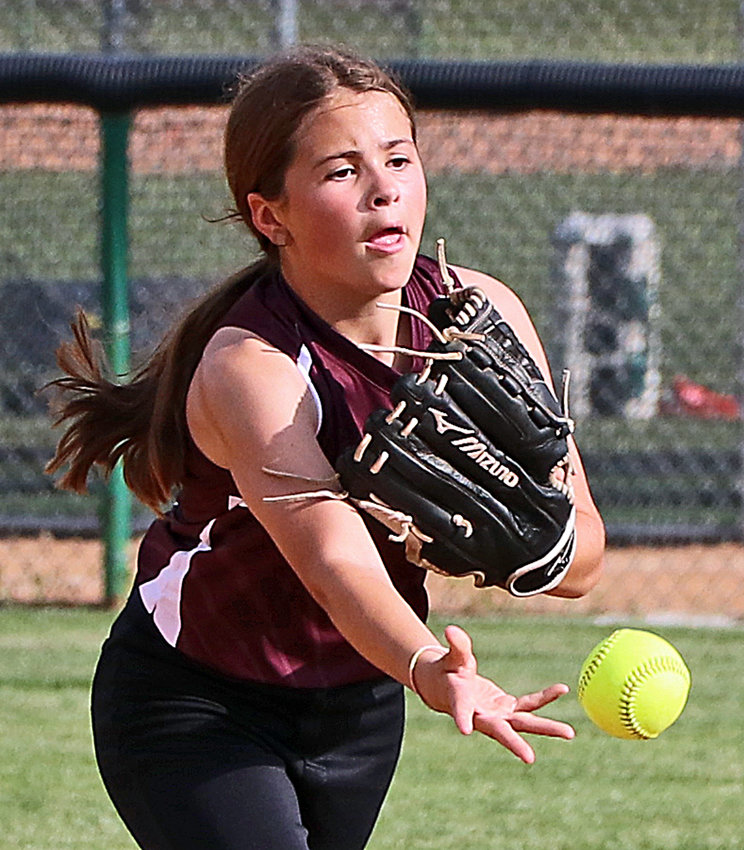 Finley Timm of the 12U Arlington softball team tosses the ball to second base for an out June 10 at the Blair Youth Sports Complex.
Grant Egger
Previous Next
Posted Friday, June 17, 2022 10:30 am
By Grant Egger - sports@enterprisepub.com

The WDSA Gold beat the Fremont Force Bixby on Sunday, winning the age 12 and younger USA Softball of Nebraska C District 8 Tournament contested across three days at the Blair Youth Sports Complex.
Overall, Washington County teams representing Blair, Arlington and Fort Calhoun competed in four District 8 Tournaments in three locations last weekend.
In Blair during the 12U tourney, the hometown Diamonds and Chaos — and an Arlington team — played postseason softball. The Chaos posted a 2-2 tournament record, besting the Nebraska Force Elite 10-1 and the Oakland Rockets 10-6. It also had losses to Pender (4-3) and Cavalry 12U (11-0), though.
The Diamonds, meanwhile, went 1-2. They beat the Wayne Dirt Devils to start, 9-3.
Back-to-back 7-1 and 4-2 losses to the Nebraska Storm and Nebraska Edge, however, eliminated the Blair team from contention.
Arlington 12U team went 0-2 in Blair, too.

10U
Four county teams competed in Bennington during the age 10 and younger District 8 Tournament last weekend. The 10U Blair Chaos team went 1-2 with a 6-3 victory against the Nebraska Storm's 9U squad. It also lost a 11-3 game to the Nebraska Force Elite and a 12-6 matchup with Mead.
The Fort Calhoun Pioneers 10U team went 1-2, too. They started with a 11-10 win against the Wayne Dirt Devils before back-to-back losses to the Bennington Badgers (9-4) and the Ashland Blue (14-5).
Arlington's pair of teams in West Point combined to go 0-for-4. The Eagles' closest game was a 10-5 loss to the Millard Fury Reinke squad.

14U
Arlington Youth Sports' squad went 1-2 during the 14U USA Softball of Nebraska district tourney in West Point. The Eagles started with a 13-6 win against the Nebraska Edge before two losses eliminated their team from a district title.

18U
Also in West Point, the Arlington age 18 and younger softball team earned a 1-2 record. It beat the Tekamah-Herman Black squad it faced after an 8-3 loss to the Nebraska Venom, but also lost an 9-8 game to be eliminated.