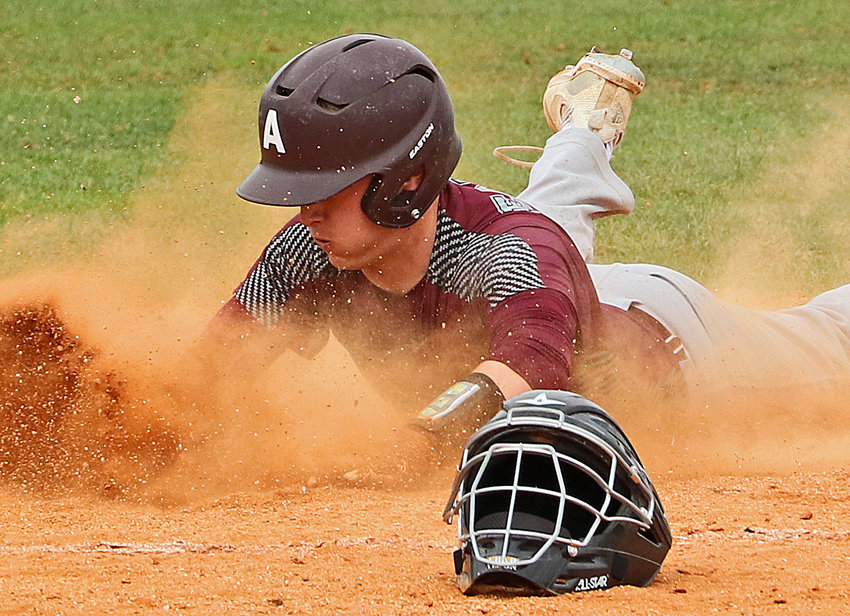 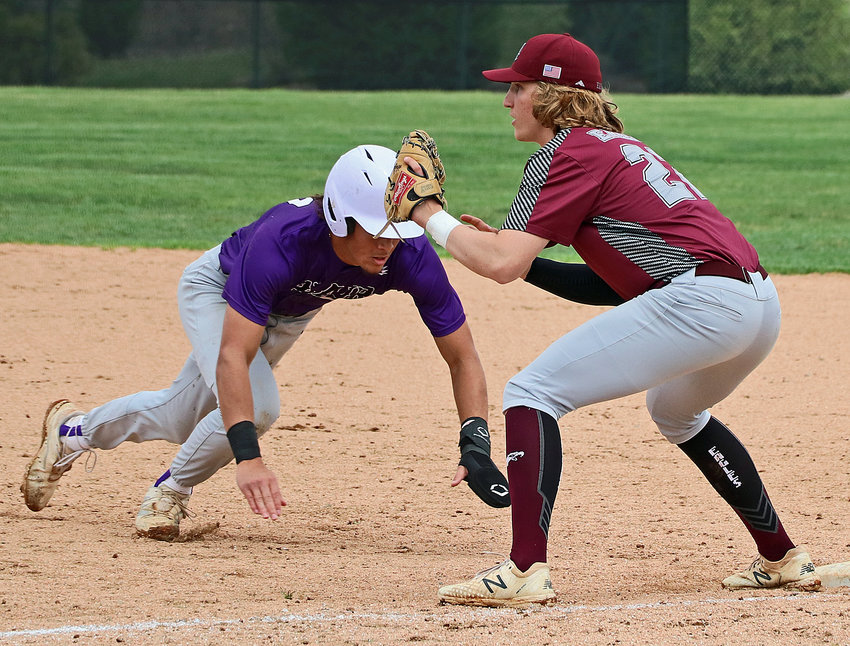 Blair's J'Shawn Unger, left, lunges back to first base as Arlington's Nick Smith waits on the throw to the bag Friday in Waverly.
Grant Egger 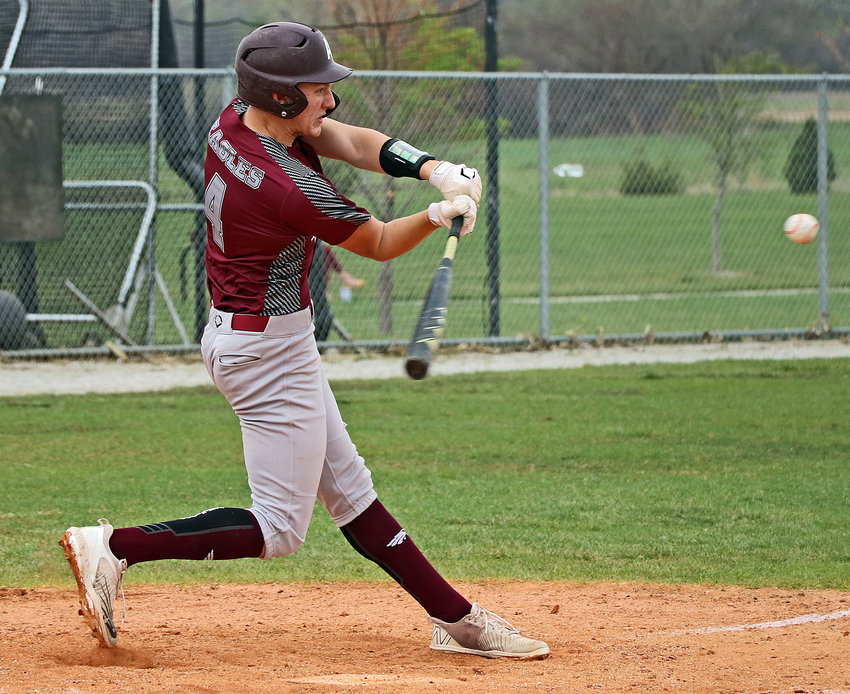 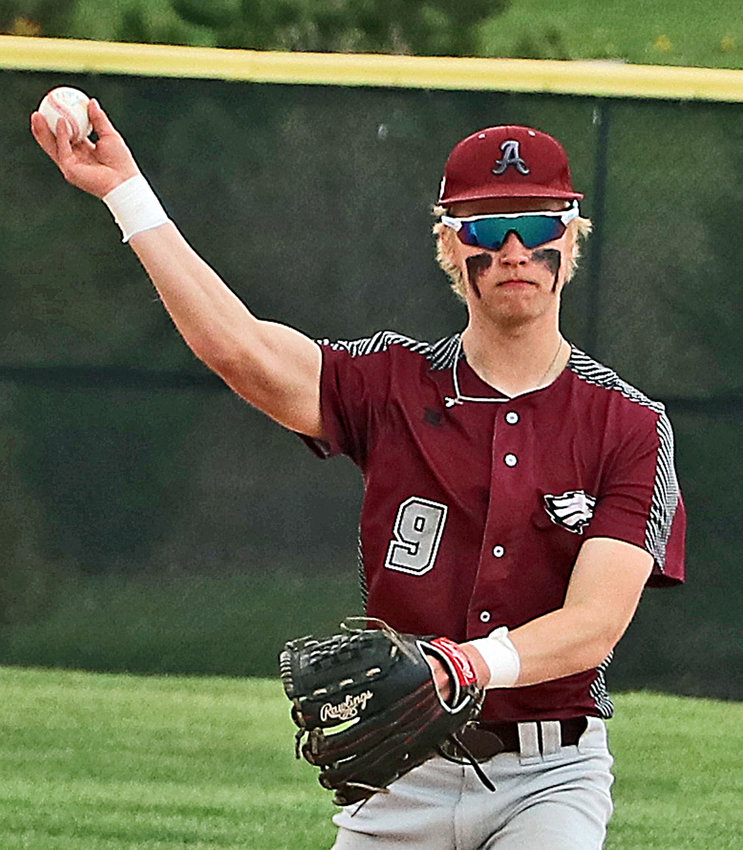 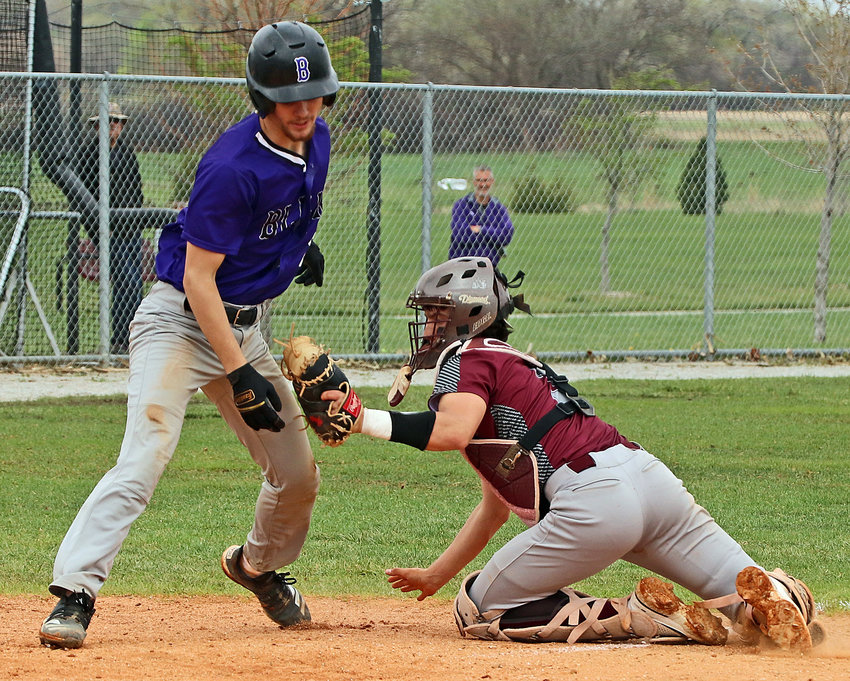 The Arlington baseball team played ahead for much of Friday's Class B District 1 opener against Blair at Lawson Park in Waverly.
“Besides the one inning, we kind of did what we wanted to do,” Eagles senior Logan Kaup said.
The top of the sixth frame meant a lot in the end, though. The Bears (8-9 overall) scored six runs, turning a two-run deficit into a four-run lead during their 9-4 victory.
Ultimately, the sixth inning all-but-ended AHS' season.
“I think it will stick in my mind for awhile,” Kaup said.
Coach Tyler Stender's Eagles (9-13) scored the game's first run during the first frame, though. Kaden Pittman and Trevor Denker each hit two-out singles before the former scored on a throwing error.
Arlington then went a 2-0 during the second when Jack Bang hit a two-out RBI single to score Dalton Newcomer, who'd reached on another BHS miscue.
The Bears pulled even with two runs during the top of the fourth inning, but the Eagles responded with two more runs — their last two of the spring campaign. First, during the bottom of the fourth, senior Isaac Foust singled and stole second base to set up Newcomer. The infielder delivered, too, smoking a hit off of Blair second baseman Greyson Kay's glove.
“I almost stumbled and face-planted,” Foust said of his sprint to score a 3-2 AHS lead. “I was like, 'Oh crap.'”
Instead, the senior hit a hard, face-first slide safe over home plate.
“Everyone asked if I was OK,” Foust said.
But he was better than that.
“I mean I scored, so I was OK,” the Arlington ballplayer said. “It was fine.”
Next, during the fifth frame, Nick Smith tallied a second Eagle hit hard off of a Blair Bears' glove. His knock to third baseman Shea Wendt was difficult enough to handle to allow Pittman to score.
Through five innings, coach Stender's team led BHS 4-2.
“Our pitching was good,” Smith said, noting the efforts of Tyler Ott. “Our approach at the plate was better than it has been over the last couple of games.”
But then came the Bears' six-run sixth, highlighted by Wendt's two-run homer well over the left field fence. Braden Monke, Smith and Kaup reached base for the Eagles from there, but they couldn't plate any more runs during the season-ending defeat.
AHS' spring was filled with some good and some bad.
“Definitely a bunch of ups and downs,” Foust said. “But practice, games, (batting practice) — we all talked to each other and stuck through it. It was a tight group and we never back downed from anything.”
That showed against a school bigger than their's in the district tournament.
“We like playing teams with good players on them,” Smith said. “We like to show our skills.”
Friendships were forged through the season, but also confidence.
“Knowing the baseball we can play,” Kaup said when asked what he took from the Eagles' strong start against BHS. “Going into summer we have that confidence to keep playing like how we did today.”
The American Legion summer baseball season is just a few weeks away.