Krivohlavek earned third at 125 pounds, pinning Bellevue East's Hailey Knight in 37 seconds to close out the tournament. She was 4-1 for the day.

Allen, meanwhile, went 3-2 to finish fourth at 145 pounds. She had three pins.

Eagles Avalon Wright and Teagan Taylor added a win apiece in Weeping Water, too, but fell short of the podium. Their team next competes 6 p.m. Thursday in a home dual against Wisner-Pilger.

Arlington's Trey Hill, and Fort Calhoun's Ely and Lance Olberding, earned Nebraska Capitol Conference (NCC) Wrestling Tournament titles Saturday at Conestoga.
The three Washington County wrestlers led their teams to fifth- and eighth-place finishes, respectively, while Syracuse earned the team championship by a point ahead of Raymond Central. The Pioneers claimed fifth with 99.5 team points, while the Eagles were eighth with 82.

Olberdings win weight classes
Fort Calhoun's Olberding brothers combined to go 6-0 Saturday, sweeping the NCC's 132- and 138-pound weight classes.
Lance improved to 29-2 this season with a 5-0 decision win against 33-6 Logan View wrestler Kaden Gregory during the 132 finals. The senior earned two first-period pins on his way to the finals, too.
Ely, meanwhile, pinned his way through the 138-pound bracket. His finals match against the Raiders' Chance Foust took just 2:25 with the Pioneer improving to 33-1 this season.
FCHS' Gage Nixon, Levi Lasher, Dane Jensen and Dakota Tripp added top-four finishes as well. Nixon and Lasher each wrestled finals matches, finishing second in their weight classes.
Nixon earned a technical fall and a second-period pin at 120 pounds, while Lasher reached the 126 finals with a third-period pin against Ashland-Greenwood's Matthew McConnell.
Jensen, meanwhile, went 1-2 at heavyweight to finish third. He pinned Logan View's Garrett Gahner in 4:49 to close out his tourney.
Tripp was 1-2 at 195 with a pin of his own, too.
The Pioneers next compete 6 p.m. Thursday at a Tekamah-Herman triangular.

Hill leads Eagles' efforts
Hill won three matches at 113 pounds to win the bracket for Arlington.
The Eagle pinned Fort Calhoun's Aiden Garbers first Saturday before earning a fall against Conestoga's Asher Keohnen second. Then, in the finals, he bested 26-11 Yutan wrestler Janson Pilkington by 8-4 decision to improve to 25-5 overall this season.
In addition to Hill, coach Doug Hart's Jake Flesner, Kolton Gilmore, Tate Johannes and Tanner Kyllo earned top-four finishes. Flesner, a 106-pounder, was 3-1 for third place, pinning Walker Terry of Ashland-Greenwood in the finals match.
Gilmore, meanwhile, went 3-1 at 152 for third. He is 24-9 this season after two pins and a 5-2 decision.
Johannes was 3-1, too. The AHS 182-pounder scored two pins and bested Trey Rodis of Conestoga by 8-2 decision.
Kyllo didn't wrestle a full three-period match Saturday, finishing 2-2 with a 31-second pin during the first consolation round.
The Eagle boys next compete 6 p.m. Thursday in a home triangular against Wisner-Pilger and Pender. 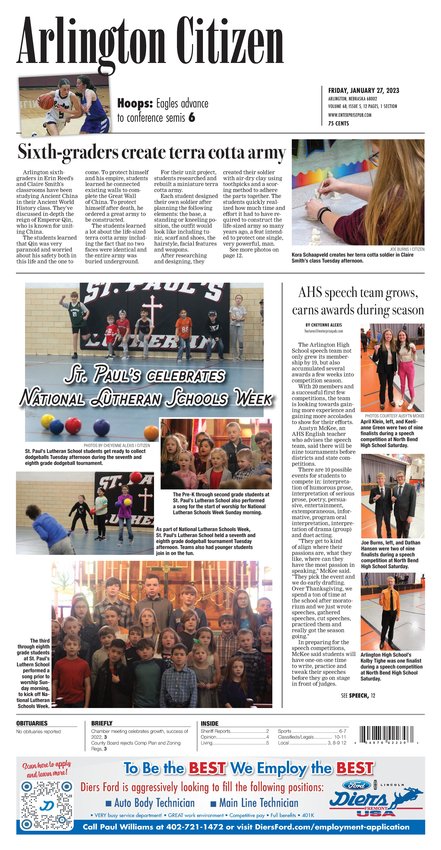